Septate Uterus: My Decision to Have Surgery 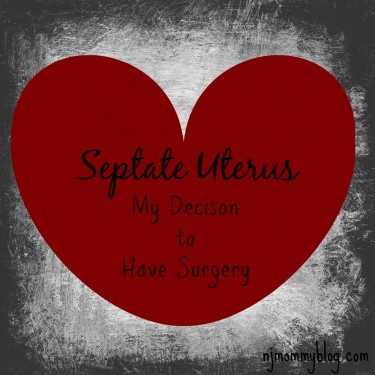 There are so many wonderful things I’m looking forward to as spring approaches, but the arrival of spring also makes me reflect on a trying time in my life several years ago.

In the spring of 2010, I was officially diagnosed with a congenital uterine anomaly called a septate uterus. Up until that point in my life, I can’t say I had really given my uterus much thought. After three years of marriage, I still considered myself a newlywed, and pregnancy was a distant thought in my mind. When I was diagnosed and learned that a septate uterus could potentially cause infertility issues such as increased risk of miscarriages and inability to carry to term, I was forced to give my uterus some serious thought. 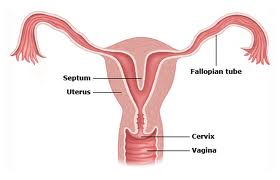 Typically, a woman may get a diagnosis of a uterine abnormality after having frequent miscarriages or a preterm delivery. I consider myself extremely lucky.  I was diagnosed by chance before even trying to conceive.  I was having some consistent pelvic pains, so as a precaution my gynecologist ordered a transvaginal pelvic ultrasound.

After reviewing my pelvic ultrasound, there was no sign of what might have been causing the pelvic pains (pains were not related to my uterus), and I was given a clean bill of health (pains did eventually subside).  Still, the ultrasound showed there was evidence that I had a uterine abnormality. There was a possibility of either a bicornuate uterus (also called a heart-shaped uterus) or septate uterus, and I would need a pelvic MRI to confirm.

From that point, things got intense.  I felt like I was part of a medical domino effect.  After the ultrasound, I went for the MRI. A bicornuate uterus was ruled out and a septate uterus was confirmed. This meant that I had a band of tissue in the middle of my uterus that greatly increased my risk for miscarriages, and if I did not miscarry it put me at risk for preterm labor and delivery.

This was a lot to take in.  Suddenly, I felt like my fertility was in jeopardy.  My mind was flooded with questions and my anxiety was growing.  At 28 years old, I was asking myself, “Would I be able to have children?” I felt a huge pit forming in my stomach.  It’s funny- I had spent a big part of my life so far trying not to get pregnant, and there I was suddenly praying that I could.

After the MRI, I needed further testing to help determine my next course of action. My gynecologist sent me for a test called a hysterosalpingogram or HSG to look closely at the inside of my uterus. I unknowingly had the test done at an imagining center that doesn’t frequently do HSGs and it was an unpleasant experience to say the least.   The results confirmed a partial septate uterus.

My gynocologist suggested I speak to a fertility specialist to go over my options.  She referred me to Reproductive Medicine Associates of New Jersey and I scheduled a consultation with a fertility doctor.  The fertility doctor was patient and comforting. She provided me with a wealth of information and answered all of my questions.  At another appointment, she performed her own HSG (a much better, painless experience). Then, she gave me my options.

Option 1: Treatment via outpatient surgery to correct my uterus; performed during hysteroscopy in which the tissue band in the middle of my uterus would be removed.

Option 2: Wait and see what happens when I try to get pregnant; address any concerns if difficulty occurs.

Clearly, I needed time to think about this.  As with any surgery, there was risk involved.  I had to go under anesthesia, there was risk of uterine perforation, infection, and although it reduced the risk of miscarriage, still there was no 100% guarantee my repaired uterus would be strong enough to carry a baby to full term.

On the other hand, could I handle the idea of possibly having recurrent miscarriages? Could I begin my journey of trying to conceive with infertility on my mind? After weighing my options, talking to my husband, and a lot of emotional turmoil, I decided to have surgery.  I did not want to wait and see.  With so many uncontrollable things in this life, I felt good feeling like I could take control and do something about this problem.

Surgery went well and my uterus was corrected.  Aside from cramping and light bleeding for a few days after the surgery, I was just fine.  My uterus was whole again.

Two years later, I was pregnant and had no difficulty conceiving. Having had the surgery, during my pregnancy I was considered high risk and needed extra ultrasounds and monitoring.  For me, that just meant being able to see my baby a few extra times. In 2013, I carried to full term with no problems and that even surprised my ob/gyn. I delivered G, my beautiful full term, 8lb 7oz  baby girl, and I felt so blessed.

Uterine anomalies, such as the one I had, are quite common, and surgery certainly isn’t the answer for everyone, nor is it always necessary. However, I hope my story can give someone else hope and comfort, if ever faced with this issue.